This article was published on: Wednesday June 27, 2018

In 1996, after witnessing the damage left behind by hurricanes earlier that year, the disabled Marine Corps veteran launched his own business, Retention Pond Services, in his hometown of Wilmington, N.C.

The storms had destroyed the basins that hold stormwater and they were overflowing. Glenn decided to do something about it. Luckily, four years in the Marine Corps – from 1980 to 1984 – prepared him for the hard work ahead.

“It’s not glamorous, not high tech. It’s done with good, old-fashioned manpower,” he said of his business.

Glenn developed a relationship with Walmart in 2002 when a store in Wilmington had a runoff issue in the parking lot. Walmart’s construction division called the state’s stormwater regulators and asked for a recommendation on whom to hire for help. Retention Pond Services was their answer.

When the same issue happened again, this time at another store, Walmart decided to expand the maintenance procedures developed with Glenn’s company. From there, it went nationwide.

Retention Pond Services now repairs, maintains and services stormwater systems for 1,200 Walmart stores and Sam’s Clubs across the U.S. The goal is to help Walmart meet rules and regulations set by the Environmental Protection Agency and reduce the risk of water pollution. 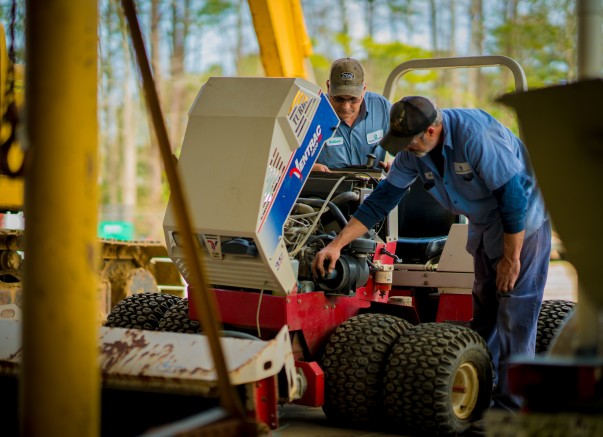 “I remember my first meeting with Walmart [representatives], and they started talking about being ‘green’. I had never heard anyone talk about green – being environmentally conscious,” he said, adding that the retailer encourages suppliers to be responsible by leading by example.

He didn’t realize it at the time, but Glenn and his company would play a major role in bringing that to fruition. He said Walmart has become a standard bearer of stormwater maintenance for big-box retailers throughout the U.S.

Caring for the environment comes at a cost, whether it be time or money, but the results are well worth it.

Retention Pond Services began with 16 employees. Fast-forward 20 years and it now employs as many as 250 workers each year, including Glenn and three other senior leaders, with clients ranging from retailers to municipalities. The number fluctuates with the seasons, but one thing remains constant – there are always military veterans like Glenn on staff. Several veterans started in junior positions and moved up through the ranks.

The business was hiring veterans before Walmart introduced its Veterans Welcome Home Commitment in 2013, but Glenn said the initiative is a great encouragement for suppliers and veterans alike. “It goes back to [Walmart] recognizing our service and appreciating what we’ve done,” he said. As a veteran himself, Glenn knows that the skills and can-do attitude learned in the military easily transfer over to civilian jobs. Glenn takes pride in his team – “I’m only as good as my worst employee” – and in protecting the environment. Much of that pride stems from his childhood in Chesapeake Bay, Maryland. 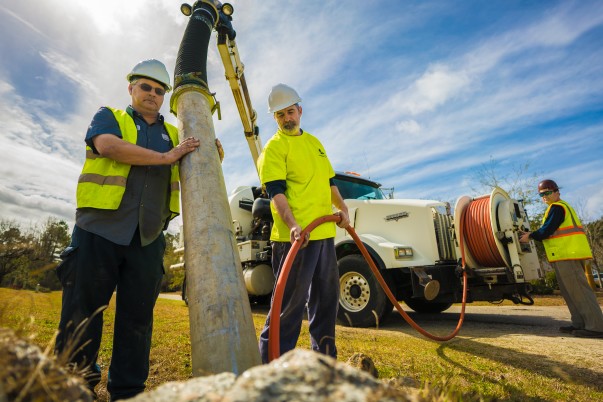 “My grandfather used to tell me how great fishing was – about catching massive fish. When I was growing up, there were no fish. The bay was essentially dead, killed by pollution and runoff.”

In the 1970s, Maryland got involved in a save-the-bay campaign, and the federal government’s Water Quality Act followed in 1987. Those actions helped return fishing in the bay to its former glory.

Caring for the environment comes at a cost, whether it be time or money, but the results are well worth it. As U.S. businesses continue to grow, Glenn and his team are ready to step in and protect our communities.

As we near the eight week mark since #hurricaneflorence made landfall on #wrightsvillebeachnc, our community is starting to see the results of our awesome #disasterresponse teams effort. 👏
The debris pile measures over the length of a football field and stands just over four stories high. We are proud to serve our local community and are grateful we are returning back to normal. Together. 🙌

Special thanks to @drones_eye for continued professional aerial drone documentation.

Our Director of Business Development, Jaymie McGuire, enjoyed educating and speaking with all the attendees yesterday for the Southeast Region Federal Construction Summit 2018 at @wilmingtonconventioncenter. We’re very proud to have been a GOLD sponsor at this event and look forward to helping others with our unique blend of services. #wilmingtonnc #whatsupwilmington #tradeshowlife #tradeshow #stormwater #disasterresponse #environmental #heavyequipment ...